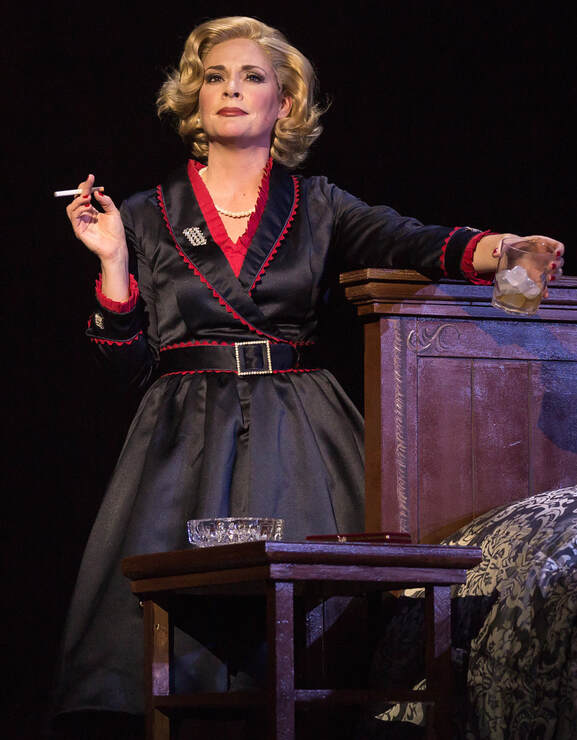 Margaret Johnson in THE LIGHT IN THE PIAZZA 2016

"Chelsea Plumley gives the performance of a lifetime as Margaret, holding the audience in her palm as the dear woman moves from unintentional racist and well intentioned protector to cultured woman of the world and gracious mother of the bride. Plumley sings the soprano role beautifully and delivers her lines with a delectable accent, but it is her expression of the unspoken fear and unfolding love in Margaret’s heart that is the true hallmark of the quality of her performance. Plumley unleashes all of Margaret’s inner joy as she sings divine 11 o’clock number 'Fable'.”
Simon Parris, Man In Chair

"With her warm, true tone, vocal control and range, Plumley is outstanding as Margaret, singing the complex melodies of Dividing Day and The Beauty Is, as well as the hopeful, opening duet with Clara, Statues and Stories, and the gently romantic duet with Anton Berezin as Signor Naccarelli, Walk With Me. As the narrator at the centre of the production and with her accomplished acting, Plumley balances wry and witty delivery with poignant narration and the fierce actions of a protective mother."
Kate Herbert, Herald Sun

"Plumley is simply sublime as Margaret, as the mother of Clara with the biggest journey of all. She is perfectly mid-western in the first act, as she protects her daughter from the terrors of judgement and disapproval. The growth she gives Margaret throughout the show is wonderful and her comedy is spot on every time. Deserving of her standing ovation!"
Broadway World, Victoria Beal

"While the entire cast is sublime, Chelsea Plumley carries the show. Plumley’s Margaret Johnson is a deeply concerned mother, torn between trying to protect her daughter from any of life’s harm and letting her be happy. She goes through a difficult yet believable struggle slowly releasing her daughter to a man, accepting that she can no longer protect her daughter from everything. Her performance is warm and moving, and her voice is rich and truly stunning."
Dani Rothwell, Theatrepeople

"Chelsea Plumley plays the lead role of Margaret Johnson and she is brilliant. Her performance is nuanced and she brings out all of the complexities of Margaret’s character. Plumley puts her gorgeous soprano to good use throughout the show and sings Guettel’s score beautifully. When Plumley sings ‘Dividing Day’ in act one we see the disintegration of a marriage and a mother’s wish for a different life for her child in one perfect song and one poignant performance."
Reuben Liversidge, Performing Arts Hub

"Chelsea has always been a natural comic with a powerhouse voice, but it’s her ability as an actor to use silence and pathos alongside her trademark timing that has her hit the heights as Margaret. A fine performance deserving of an award nomination."
Julie Houghton, Classic Melbourne

"The incomparable Chelsea Plumley leads the cast as Margaret Johnson, the mother who must confront her own assumptions about her daughter’s future and ultimately becomes a champion for her empowerment. Her eleven o’clock number which concludes the show, ‘Fable’, is one of the highlights of the night alongside her mastery of this multi-layered character who could quite easily polarize the audience. Instead, she brings the audience on a journey through this woman’s difficult predicament to the point where we are cheering for her at the end of the production."
Standing (Inn) Ovation

Gabby/Bobbi in CITY OF ANGELS 2015

"Chelsea Plumley (Gabby/Bobbi) almost steals the show. She’s just magnificent, nuanced, subtle, sophisticated, witty, and in fine voice in her two great numbers “With Every Breath I Take” (Bobbi) and It Needs Work (Gabby). Her 1940s ‘sophisticated’ poses as Bobbi are hilarious and timed to perfection. She is a National Treasure."
Coral Drouyn, Stage Whispers

"Chelsea Plumley almost steals the show as Stine’s neglected wife Gabby and Stone’s sexy femme fatale Bobbi. More than any other performer in the show Plumley successfully straddles the line between sincerity and over the top parody. Her thrilling singing voice goes from a traditional legit mix to a smoky and sexy breathless jazz style at the drop of a hat."
Reuben Liversidge, Performing Arts Hub

​"As Stone’s ex-fiancé Bobbi, Plumley gives a masterclass in playing the kind of film noir ‘dames’ that private detectives obsess over, full of breathy over-blown drama before delivering a heartbreaking torch song. Then she gives a startling turn as Stine’s betrayed wife Gabby. "
Adam Rafferty, Theatrepeople

Chelsea Plumley as Gabby and Bobbi is equally as entrancing and shows just how seasoned a performer she is.
Kara Bertoncini, The AU Review

As Bobbi the club singer, Plumley sings a sultry rendition of With Every Breath I Take, and her duet with Harrison, What You Don’t Know About Women, is sassy and audacious.
​Kate Herbert, Herald Sun

Miss Adelaide in GUYS AND DOLLS 2014

"Chelsea Plumley is hilariously brassy as Nathan’s long-suffering showgirl fiance, and her rendition of Adelaide’s Lament (“A person could develop a cold”) is impish and sassy."
Kate Herbert, Herald Sun

"It is Plumley’s ability to pull off the unique intonation of the Miss Adelaide character in both dialogue and song, along with the embodiment of a desperate doll in love, which makes Plumley’s performance a show-stealer."
Narelle Wood, Theatrepress

"Plumley's performance of A Bushel And A Peck, Adelaide's Lament, and Take Back Your Mink also provide plenty of well-timed hilarity..."
Brett Considine, Broadway World

“Plumley anchors the show with a sparkling and poignant portrayal of a mother in an impossible position. She has mastered the character's Liverpudlian accent to the point where she can sing in it (no mean feat) and exudes a magnetic blend of sass, warmth and stoicism before yielding to the horror of her family's destruction.”
The Age, Cameron Woodhead

“Plumley is undoubtedly the star as Mrs Johnstone, delivering a convincing performance, nuanced characterisation and captivating singing, particularly in her poignant renditions of Marilyn Monroe and Easy Terms.”
The Herald Sun, Kate Herbert

“Chelsea Plumley in the crucial role of Mrs Johnstone is the emotional touchstone of the entire piece, producing a portrait of a flawed, poverty-stricken woman of fierce maternal love and indomitable spirit, slowly bowed down under the tragic consequences of an impulsive decision. Her expressive and earthy singing voice perfectly captures the essence of the character, and she is to be applauded especially for flawlessly maintaining the extremely challenging Liverpool accent for the entire show.”
Theatre Press, Bradley Storer

“She trod a beautiful line between dignity and a complete shambles, all delivered with perfect comic timing and fully-realised characterisation.”
Adam Tonking, Theatre Press

“Stealing the show out from under all of the above is the sensational Chelsea Plumley…with delicious, fully realised, physical comedy...”
Simon Parris, Theatre People

“Chelsea Plumley, as Jolene Oakes, an Oklahoma oil heiress, was nothing less than entirely eccentric, performing with an extraordinary, and at times, maniacal, energy.”
Olympia Bowman-Derrick, Australian Stage

“Marina Prior as a wealthy American divorcee, and Chelsea Plumley as a bronco-bustin' Oklahoma oil heiress, offer moments of individual comic brilliance.”
Cameron Woodhead, The Age

“It’s an extraordinary thing when a Music Theatre performer quite literally ‘stops the show’. Aficionados of the form crave ‘showstoppers’ – that moment when the massive emotional and musical machine that is a piece of Music Theatre turns on the head of a pin – stopped in its tracks by the absolute perfect performance of the perfect song at the absolute right time and place of the night: which is precisely what Chelsea Plumley did at this Opening Night performance with the ‘anthem’ of the show: Fly Away.”
Geoffrey Williams, Stage Whispers

“As Vivien, Chelsea Plumley is a star! … Strong, vulnerable, funny, volatile, she owned the stage whenever she appeared ... Her big 11 o’clock number, Fly Away, was well served by her stunning vocals and interpretation.”
Chris Baldock, Theatre People

“Chelsea Plumley (Vivien) delivers exactly what we have come to expect from her consummate ability: exquisite choices, one after the other ... To breathe the same air as 'Plumley on fire' is to breathe in the colours of life. True inspiration. If you are not crying at the end of Fly Away, a trip to a neurosurgeon could be order.”
Will Conyers, Broadway at Bedtime 94.9FM

“The star-studded list of names involved in this production is awe-inspiring. Chelsea Plumley, Cameron McDonald and Glen Hogstrom are the best of the best in terms of musical theatre performers and their performances last night demonstrated why: almost flawless; heard every word; felt every shift in emotion.”
Paul Kooperman, Australian Stage

“The team of five women and one solitary - and brave - man (Valerie Bader, Chelsea Plumley, Anne Looby, Gretel Scarlett, Angela Kennedy and David Harris) hold the audience in the palm of their hands from the opening number.”
Nigel Munro-Wallis, ABC Brisbane

THE BOY FROM OZ – MUSICAL DIRECTION 2008

“Chelsea Plumley attacks her wedding scene as the near psychotic Amy with hilariously frenetic energy. During Getting Married Today, she manically rushes around the stage and doesn't miss a beat while singing one of the most challenging and funniest patter songs of music theatre history…”
Michael Finn, Australian Stage

“Add to the mix the gifted Chelsea Plumley, a period-perfect ingénue as the studio secretary who loves Joe…and you have a quartet of stars who could scarcely be bettered”
Melbourne season, Jim Murphy, The Age, 2005

“Abundant natural talent as a singer, actress and pianist…but it is her cheeky humour that sets her apart”
Jim Murphy, The Age

"Chelsea Plumley is a delicate whirlwind of a performer who often accompanies herself, sings like a demon and has an extraordinary way with comedy."
Cabaret Scenes New York, 2001

“She’s got a huge voice – she could have thrown out her microphone and we wouldn’t have missed it.”
Homodish New York, 2001

“For an audience to fully appreciate a song and its subtext, the singer must have the intellect and generosity of spirit to allow the audience inside her life, to endure, share and enjoy with her its ups and downs. Chelsea Plumley is one of the rare artists able to achieve this.”
Helen Matthews, The West Australian

“Chelsea Plumley is clearly a singer/actor of great range and ability. Chelsea Plumley in Concert was more than a collection of fine music, performed with consummate musicianship, however; it was a serio-comic promenade through the life and song of a very fine artist.”
Dr David Schwartz, NY Cabaret.Org Web site